skip to main | skip to sidebar


I was amazed as I watched the PBS Nova program about how IBM has built a computer named “Watson” to play against Jeopardy champions, starting tonight.

The program followed advancements in artificial intelligence, competitions in chess, which is essentially entirely mathematical, and then the challenge of Jeopardy, where the “questions” are really answers and are filled with tricky language and idioms that are meaningful to humans but very difficult for a machine to “understand.”

The program describes how the IBM programming team solved various stages of the problem getting Watson to be able to process greater and greater levels of nuance and meaning. Some of the issues involved having the machine be able to “hear” the incorrect answers of other contestants so it doesn’t repeat their mistakes, and learning a strategy for wagering on Final Jeopardy.

The big realization is that the computer never really understands anything.

Computer “gets” nuance by performing incredibly complex searches through data, and it plays chess by analyzing a greater set of probabilities mathematically than a human can, but in both cases, what is apparent from these incredible feats is not what it can do, but what it isn’t capable of remotely doing – which is living as a natural organic life form.

While the human contestants on Jeopardy also have a huge processing unit in their brains, they are competing using their feelings, sensations and emotions, all of which are crystallized in their grasp of he language that represents reality in human terms.

Watson is using this language entirely differently, but performing calculations and searches on words and never really “taking in” the meaning.

To me, there are two aspects of this experience that are significant.

First, the human achievement of simulating language and human understanding is incredible, rivaling perhaps going to the moon, building the Internet or decoding the genome.

But Watson defeats its human competitors through brute data processing power and technology, reminding us in the process that our own logical mind is not the entirety of what we are—as authors like Eckhart Tolle point out to us when they suggest meditation to notice that our thoughts are only part of who or what we are.

Actual organic life, of which we are a part, is a vibrant expression of sensation and feelings including love, compassion, and a myriad of other emotions, all of which the human Jeopardy contestants call upon to understand the questions in the contest. Their processing of the information is slower than Watson, but their grasp of the meaning is infinitely deeper.

This should serve to remind us that what we are a part of, and what we take for granted as we worship at the altar of science and technology, is infinitely more complex and alive than the machines we create in our image.

Neuroscience, biology and quantum physics are only beginning to penetrate the previously unknowable boundaries of what life is.

In their hubris, scientists have suggested that they have created life by manufacturing DNA, but they have inserted the DNA into organic cells that were already energetic with whatever it is that animates ordinary matter as organic – call it spirit or what have you.

Watson for all of its mathematical power doesn’t have it.

Even the simplest life form does. My cat is connected to existence and the universe in a way Watson never will be. It understands a great deal of my behavior and possibly some of my language with its body, sense and perhaps intuition.

When we examine the complexity of our DNA and see that it works on the same principles as a computer—capable of being decoded symbolically—it suggests at least to me that there is also an intelligence at work within the very nature of life. And perhaps our development of computers, programming software like that which “animates” Watson, is a resonance with whatever it is (spirit, mind, energy) that is behind existence itself.

At its most basic the intention of life is simply to be--and to survive. That is the programming explained by Darwin in his theory of natural selection and evolution.

It is the belief of some scientists like Bruce Lipton, the author of Biology of Belief, that human evolution is the process of life becoming more conscious of a higher purpose through our own growth both individually and collectively. Perhaps technology itself and projects like Watson are lessons along that path, which may serve to hopefully educate us enough to evolve and survive as a species rather than use that same technology to make ourselves extinct.

The ultimate source of our own programming may not care whether the human expression of life survives or not—it may well have infinite variety of life forms to experience itself through.

Up until recently the concept of a higher intelligence has been the province of religion which has named it God, or perhaps science fiction.

Science has avoided this area for lack of evidence; and even the creation of a Watson does not speak to higher intelligence, except for the humans who programmed it to perform its incredible calculations.

But as we watch Watson compete against humans on Jeopardy we might get a vague sense that what Watson is showing us, and which we take for granted moment to moment, is precisely what Watson is NOT, and what we ARE – sensory beings capable of some of Watson’s processing power but also infinitely more in terms of love, touch, wisdom, grace and community.

Watson might win Final Jeopardy one or more of these nights, but it will never sense itself as alive. It will never have the capacity to connect to the source of its being on an organic level, because it is not a being but a thing.

I believe that this is at the root of much of the despair and isolation that people feel as they are literally overwhelmed and consumed by technology that seems to be its own reward, continually “upgrading” to achieve a level of perfection that can only come by being natural and human.

In my own life technology has reconnected me to many old friends and given me the means to pursue many human endeavors—in that way it has been immensely empowering. But I have to be careful that the allure of technology does not also make me deadened to what truly makes me human, and disconnect me from the very source of my humanity—my connection to a higher power—and perhaps my soul.
Posted by Tom Bunzel at 11:56 AM No comments:

Recently I was turned on to some great resources in the form of two books, Emotional Freedom and Positive Energy by Judith Orloff – her web site also has some excellent videos.

What I really like about Dr. Orloff’s work is its warmth along with its practicality.

While both books have the usual set of self assessment tests, and are filled with anecdotes and case studies from Dr. Orloff’s practice, they both also provide pragmatic and positive steps to achieve growth and a more fulfilling life, difficult and worthy goals in our current cultural climate.

In Emotional Freedom Dr. Orloff uses the concept of “transformation” of negative emotions as a basis for being happier and more fulfilled. This is a much better foundation in my opinion that beginning with the idea that something is fundamentally “wrong” with you; for example, you’re diagnosed or feel like you’re depressed.

The fact is that life is challenging and filled with emotional issues ; alternatively avoiding these issues leads to a disconnected existence of isolation which is equally challenging.

The impressive structure of the book addresses four dimensions of emotions that Dr. Orloff suggests must each be in balance for a harmonious existence: the physical biology, a spiritual meaning of one’s state of being, the energetic power that can deplete or revive you, and finally the psychology or sources of the various feelings that can overwhelm us at various times.

She deals with each of these aspects as she identifies seven main emotions, describes their effect on us, and provides concrete recommendations for transforming the negative states into their positive counterparts.

She refers to this as “alchemy” and for those who face challenging feelings in their daily lives, learning techniques to transform emotions is worth its weight in gold.

Particularly for men, who sometimes are not as adept at articulating or identifying what they are feeling, specifically naming both the negative and positive states is particularly helpful. Here are the seven transformations Dr. Orloff cover: 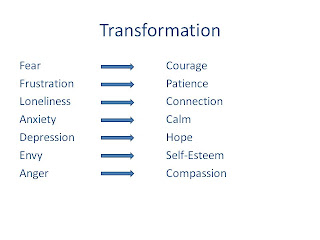 In each case, the negative conditions are thoroughly described and identified along with practical steps to transform them into their positive counterparts.

What I found particularly useful was merely the ability to pinpoint common causes or triggers for the negative states and then the payoffs that ensue when one successfully transforms them through positive steps.

In Positive Energy, and earlier book, Dr. Orloff covers similar ground but from the perspective of a series of therapeutic “prescriptions” which are actually best practices for daily life. This book also features interviews with famous people who have put these practices into action in their own careers or personal lives.

Another aspect of both books that I appreciated was the identification of how our energy or emotions can become sapped. Frequently I have thought “what’s wrong with me – why can’t I cope with what others seem to handle effortlessly?”

Dr. Orloff describes toxic people and relationships as “energy vampires” and provides suggestions for how to combat their negative effects.

She also identifies societal drains – such as “techno-despair” – which can overcome us as we feel overwhelmed by the complexities and demands of the many media with which we’re constantly assaulted.  (My previous blog on the stresses of working with Microsoft software are a good example of techno-despair).

Part of the benefit of her descriptions is the “aha” moment when one realizes that one is not alone in feeling challenged by these kinds of experiences, and that there are solutions.

Though she is a medical doctor and a psychiatrist, Dr. Orloff also describes herself as an “intuitive” healer and strongly suggests that as we work with our emotions, we pay particular attention to what dreams may be telling us about our waking lives.

The way that I have used Emotional Freedom is to quiet myself when I feel agitated or overwhelmed and to notice the negative emotion that seems to have me in its grip; for example, as Dr. Orloff describes, the grocery store and a checkout line might frustrate me if I feel rushed. Taking a greater perspective, however, and focusing on being patient (and creating some space for myself internally) can allow me to not only negotiate the current circumstances, but feel better about my own capability to handle other issues going forward.

Either of these books provides a helpful set of practical suggestions for getting through challenging times and situations. Taken together, they are a resource a heartily recommend.
Posted by Tom Bunzel at 12:54 PM No comments:

Tom Bunzel
Los Angeles, California, United States
Presentation professional and technology author. Web site: www.professorppt.com Most recent book: “Master Visually Microsoft Office 2007". Published in 2006, “Solving the PowerPoint Predicament: Using Digital Media for Effective Communication” is a detailed, project oriented approach to creating effective multimedia presentations. Other books include “Teach Yourself PowerPoint 2003 in 24 Hrs”, “Easy Digital Music”, “Easy Creating CDs and DVDs”, “How to Use Ulead DVD Workshop”, “Digital Video on the PC” and the update to PeachPit Press’ “Visual QuickStart Guide to PowerPoint 2002/2001.” Write a weekly column as the Office Reference Guide for InformIT.com. Appeared on Tech TV’s Call for Help as “Professor PowerPoint” and has been a featured speaker at InfoComm and PowerPoint LIVE, as well as working as a “technology coach” for corporations including Iomega, MTA Films, Nurses in Partnership and the Neuroscience Education Institute. Taught regularly at West LA College Extension and privately around Southern California and does presentation and video consulting in Southern California.